It’s no news to most people in SEO that Google is pushing mobile from all angles, the main thrust right now is the upcoming Google search index specifically for mobile, called “Mobile First Index”.

This push is due to shareholder pressure and the fact that Google has nowhere else to grow but mobile. By mobile, they do not mean just mobile on Wifi in big cities, or 4G and the upcoming 5G. The new mobile speed testing tool, or rather their revamped testmysite.withgoogle.com now tells you how much traffic you may lose from low mobile speed based on 3G. Actually, O2 and Three, in London often fall into 3G. 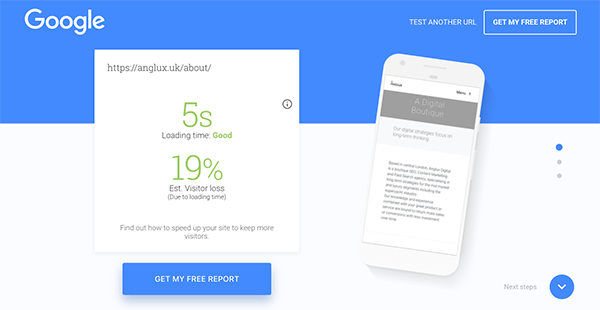 The telling “prediction” is that the tool says, “70% of mobile network connections globally will occur at 3G or slower speeds through 2020”. If anyone has the network and resources around the world to make this “prediction” a reality, Google is it. So this is probably more of an actual strategic goal than a prediction.

All that aside, for you and me the mere website owner, even if we take these figures with a large pinch of salt. There is no doubt that even for iPhone or Android users in London or other big cities, the load speed will determine if the user stays on your site or moves to the next one.

How long is a good mobile load speed?

5 seconds, it appears according to the tool, this is for the 3G connection, I think the average busy bee in London will probably move along at about 3 seconds at the most. They do say in their original post that 50% of users will expect a site to load in under 2 seconds. 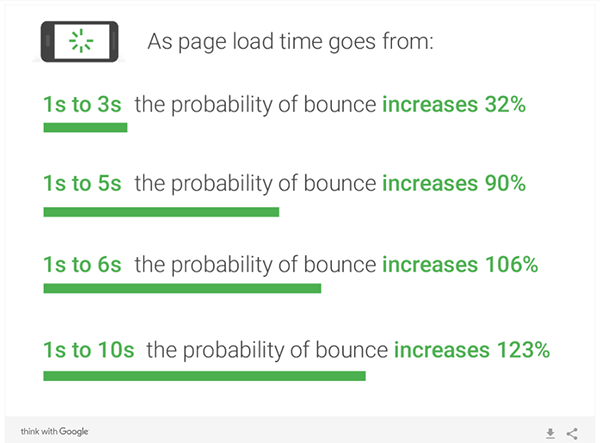 About midway, the tool lets you know it is testing on a 3G connection, this is where the 5 second as Good value benchmark comes from. 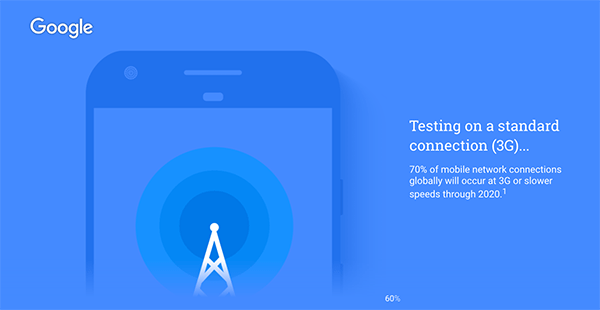 Testing on a standard connection (3G)…
70% of mobile network connections globally will occur at 3G or slower speeds through 2020.

What can you do to make your site faster?

The list of speed optimisation tasks for both mobile and desktop is virtually endless, this is why Google itself was originally minimalist and still, their design is mostly text and code. The least images you use, the more likely your site will be faster. Images should be compressed instead of original sizes. The pages, themselves can also be compressed, and cached, which in layperson’s terms means, caching/storing a version of the site or pages (both on the server and repeated user’s computers) instead of building the page from scratch every time it is loaded.

I admit event the page tested as good, or in particular, the homepage here has lots of room for improvement and again the issue is mostly with images.

Reduce scripts and plugins where possible

Modern sites and content management systems (CMS), such as WordPress, Joomla, Magento and so on, have lots of scripts and plugins, each new script or bit of functionality added will likely contribute to slowing the site down.

Your site speed is limited to the speed and location of your server.
Server Location For SEO – How Important Is It?

These are all but a few main things just about anyone could begin to understand how to make a site faster loading on mobile and desktop alike.

The AMP project is the future www.ampproject.org and the future is here.

The AMP Project is an open-source initiative aiming to make the web better for all. The project enables the creation of websites and ads that are consistently fast, beautiful and high-performing across devices and distribution platforms.

Google is again gracing the web community with yet another open source initiative, originally for news sites now also for other mobile sites. How nice of them. This is fodder for another post altogether…

One thing is clear for news sites and most others, implementing AMP would be the best way to address mobile speed. As ever getting the implementation of AMP could do more harm than good to your SEO and traffic efforts if not done properly.

Need help with site speed or AMP? Get in touch or let me know in the comments below.

Pedro specialises in SEO and WordPress, with 15 years in digital including various agencies, academia and running a very successful SEO consultancy since 2010. Pedro his an avid 10K runner and enjoys escaping to the sun, volcanoes and squash.

Fresh in the Blog

Send this to a friend